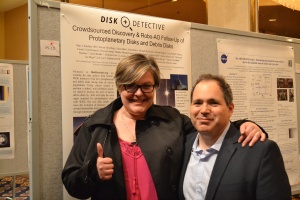 Manon Gingras and me by the Disk Detective poster at the “In the Spirit of Lyot 2015” conference.

Bernard Lyot was a French astronomer who invented a tool called a “coronagraph” that’s useful for making images of disks and exoplanets.  A few weeks ago, I went to a conference in Montreal, called “In the Spirit of Lyot 2015” named in his honor, and I learned lots of cool new stuff about images of disks and planetary systems.  Here are some of the highlights.

First of all, Disk Detective superuser Manon Gingras came to the conference and I got to meet her!  Manon was spending her last few days in Montreal before she moved to Australia, and she drove downtown to the conference hotel to spend the afternoon with us.  While she was at the conference, she did an interview with a reporter from the French language magazine Le Devoir about Disk Detective.  Manon described her experience at the conference in this blog post.  (Don’t worry, when Manon says “gunning down” she is not talking about anything violent–it’s just an expression.)

New image of the debris disk around HD 115600 by Thayne Currie.

Disk Detective science team member Dr. Thayne Currie described a debris disk around the star HD 115600 that he imaged for the first time. It’s a beauty, an eccentric ring of debris about 15 million years old around a star just about 50% more massive than the sun, essentially a younger version of the Kuiper Belt in our solar system. And–arrgh!–this star is in the Disk Detective catalog, just nobody had gotten around to looking at it yet.  So we might have been able to claim this as one of our Disk Detective discoveries too. Oh well.  Next time.

Dr. Erika Nesvold gave a talk about her new dynamical models of the Beta Pictoris debris disk. They show what happens when a planet, embedded in a debris disk, orbits very slightly out of the plane of the disk. Here’s the press release about her results and the YouTube video.  You might remember Erika if you were around during the first week after Disk Detective’s launch; she pitched in to help answer questions on Talk.

New model of the Beta Pictoris debris disk by Erika Nesvold showing how a planet sculpts it into complex spiral patterns.

And last but not least, the Gemini Planet Imager (GPI) team announced a new directly-imaged extrasolar planet, 51 Eridani b, located inside a debris disk. You have probably heard of the many hundreds of planets discovered by NASA’s Kepler space telescope; those planets have been inferred from the way they sometimes block part of the light from the stars they orbit.  Directly imaged planets–planets whose light we can collect like 51 Eridani b–are much rarer.   And most of these directly-imaged planets orbit within debris disks, one kind of disk that we’re searching for at Disk Detective.  So when we search for disks, in a way, we’re searching for planets too!

Everyone I spoke to at the meeting was interested in learning about Disk Detective, and eager to hear what we have found. I showed off some of the work we did following up our Disk Detective Objects of Interest (DDOIs) with RoboAO, and several colleagues asked to collaborate with us as a result. Hugo, Michi, Ted, Joe, Lily, Katharina, and Milton hustled to get this data analysis work done in time for me to show off.  So the science of disks and exoplanets marches on…and we’re right in the thick of it.  Keep up the good work, everybody!