This spring we did a big classification push to prepare for the second data release from the Gaia mission, which arrived on April 25, providing distances to more than a billion stars.   This data instantly converted a substantial fraction of our Disk Detective catalog from mystery objects into stars with known distances and spectral types.  Thank you for all your help getting ready for this event!   We’ve been hard at work since then on (at least) two projects involving Gaia Data Release 2 (DR 2) and Disk Detective data.  And here to tell you about one of them is Susan Higashio, a masters student at International Space University who has been spending her summer as an internal at Goddard Space Flight Center, working on Disk Detective data in Goddard’s new Augmented Reality/Virtual Reality lab. 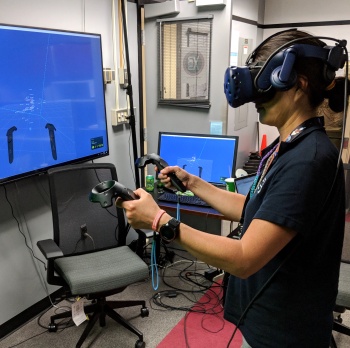 It’s Susan here and I’m thrilled to be a summer intern with Dr. Marc Kuchner on Disk Detective this summer! When I found out that I would be working at NASA Goddard, I was SUPER stoked; not only because it was NASA, but being from the West Coast of Canada, I was really looking forward to visiting the East Coast of America for the first time! Truth be told, I felt a little (A LOT!) intimidated being in the Astrophysics department here at NASA—especially because my background is NOT Astrophysics—but I quickly learned that one of the great things about citizen science is that with a little hard work and dedication, anyone can be a citizen scientist! 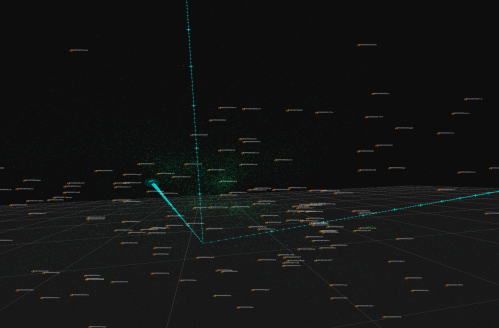 Positions of the Stars with Disks You Discovered: A Screen Shot from Goddard’s VR Lab.

In addition to being great fun, VR is a really great way to see stars from different perspectives.  When we evolve their positions backwards and forwards in time, the Disk Detective objects help reveal groups of stars that move together, or “young moving groups”! Stars within a moving group formed from the same event so they are about the same age, originate from the same area in space and move in the same direction at about the same speed. Many of the Disk Detective objects I am looking at are young, relatively speaking, (we’re talking tens of millions of years old, compared to our sun, which is about 4.56 billion years old) and so moving groups can be studied to learn about how our solar system may have formed and evolved over time. There are many known moving groups (e.g., a list of young moving groups can be found here) and stars found in Gaia DR2 that we can see in VR might belong to a known group, or maybe even be part of a new one. Wouldn’t it be exciting if some Disk Detective stars made up a new moving group?

In the 6 weeks that I have been here, I have learned so many new things. I’ve learned how to make calculations to plot H-R diagrams with stellar isochrones, which are helpful to estimate the approximate age of objects, as well as position/proper motion vector diagrams which illustrate the movement of objects over time. These diagrams can be used to plot any interesting Disk Detective objects to see if they move together over time and possibly see if they might form a moving group. I have also been spending time in the VR lab to search for additional stars that move with together with some interesting Disk Detective objects that I have had my eye on. This is not as easy as it sounds!

It’s not all work here though! I’ve had the pleasure of meeting Disk Detective citizen scientists, Josh Hamilton and his wife, Sarah, when they came to visit NASA Goddard. Marc took us all, including Steven Silverberg and another citizen science intern Michaela Allen, on a tour of the integration and test facility. It was really cool that the James Webb Space Telescope had been in the clean room just months earlier and information about the telescope is still on display. 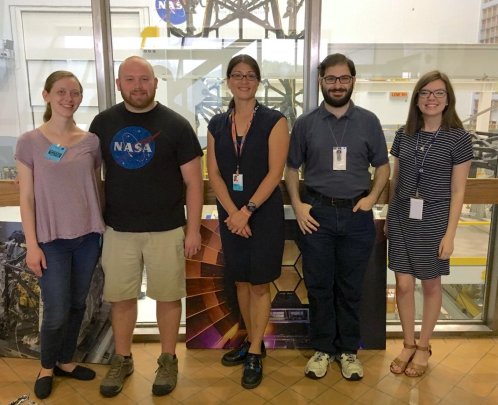 I have long dreamed of working at NASA, and because of Disk Detective and citizen science, this has been an unforgettable experience and a dream come true! Many thanks to Marc, without whose support and guidance I would not be here on this internship; to Professor Hugh Hill at ISU, who was formerly at NASA Goddard and who still has many friends here; as well as many other people who I have learned so much from during my stay here so far: Steven Silverberg and the Disk Detective team, Sarah Logsdon, Michaela Allen, and Peter Pokorny; along with the VR team: Matt Brandt, Tom Grubb, and interns Stewart Slocum, Tyler Cahill, and Hayden Hotham, to name a few. I am really looking forward to spending the rest of the summer here and continuing my work with Disk Detective and all of you citizen scientists. Thank you for your hard work and keep on classifying those objects!