We recently had another article accepted for publication in the Astrophysical Journal! A pre-print is now available on arXiv. This one presents four new identifications of long-lived accretion disks around M dwarfs (like the object in our second paper), presents new data on the first one we identified, and uses these data to define a class of “Peter Pan” disk.

In 1904, J.M. Barrie wrote the play (and book) “Peter Pan, or The Boy Who Wouldn’t Grow Up,” about a boy Peter Pan who stayed the same age forever. It was later adapted into a stage musical and a Disney animated movie. Here, we use the term “Peter Pan” disk to describe disks that behave like planet-forming disks (they have lots of material, and are still accreting material from the disk on to the host star), but are 5-10 times older than the typical planet-forming disk; they seem to “never grow up.”

To identify new disks, we cross-matched the Disk Detective catalog with the second data release from the European Space Agency’s Gaia mission, which is working to determine accurate distances to the nearest billion stars to the Earth. We then ran the cross-match through BANYAN Σ, a tool that uses Bayesian probability to estimate the likelihood that an object is in a young moving group based on its position, proper motion, and (if available) parallax and radial velocity. This turned up several matches, but two were of particular interest: AWI00063nx (J0949), and AWI000601p (J0446), which were apparent M dwarfs with strong excess in the Columba and Carina associations, just like the Paper 2 object. When we looked at the Gaia data, we found that each one was an apparent visual double–there was a second star so close by that we couldn’t detect it in our data! The systems still showed excess even after taking both components into account, as seen in the SED plots below.

We observed all four stars with the GMOS instrument on Gemini-South to determine their spectral type, estimate their radial velocities, and see if we found any spectroscopic indications of youth and/or accretion activity. We found that all four targets were M-dwarfs; the two components of J0446 were both M6 stars, while J0949 is made up of an M4 and and M5. All of them show broad emission from the hydrogen spectral line at 656.3 nm, indicating accretion; J0949A also shows emission from the helium line at 668.3 nm, an additional accretion indicator. The spectra also show evidence of low surface gravity in the stars, an indicator of youth. Finally, the radial velocities we estimate from the data are consistent with moving group membership. Based on all evidence, these objects are young moving group members with disks.

The spectra of the four new Peter Pan disks. All four are M dwarfs. The large dips are due to gaps in the camera chip on the spectrograph. Note the strong emission of the hydrogen H-alpha line at 6563 angstroms. 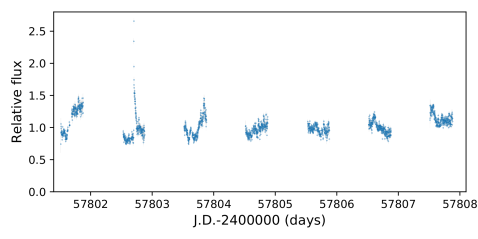 The CTIO light curve of J0808. Note the flare in the second night of data displayed.

In the TESS light curve of J0501, we saw clear periodic variations that closely follow the expected behavior for a persistent starspot or complex of starspots–like appear on our Sun, but covering more of the surface! While we didn’t see any disk occultations, we also detected a clear flare, and from published spectra and the period of the variations, we were able to determine that the system is inclined to our line of sight by ~38 degrees–enough that we wouldn’t expect the disk to go between us and the star.

The light curve for J0501 from TESS. It shows clear sinusoidal behavior, and a flare at around Day 1431.

We also observed near-infrared spectra of J0808 from CTIO, as part of our M dwarf follow-up observations. We found that the spectrum varied on 24-hour timescales. Specifically, we saw variations in the Paschen-β and Brackett-γ lines. Like the Hα line discussed above, these are hydrogen spectral lines that trace accretion activity, but unlike Hα, they aren’t as affected by stellar activity (e.g. flares). These variations show clear evidence of accretion.

The Paschen-β and Brackett-γ lines of J0808 across three nights, with a non-accreting template for comparison. There are clear changes to the lines across each night.

What Makes a Peter Pan Disk?

What Makes a Peter Pan Disk? Using the characteristics we observed above, we found the following criteria:

Thus far, including the new objects presented here, there are seven Peter Pan disks known. While one of these might be an outlier, seven suggests a class of disk instead.

Why do these occur? There are several possibilities discussed in the paper; however, the most likely is simply that primordial disks around M dwarfs take longer to dissipate than their higher-mass counterparts, a trend observed in younger associations (e.g. the fraction of primordial disks is higher around M dwarfs than earlier-type stars in the Upper Scorpius association). This would mean that the timescale for planet formation around M dwarfs is longer than we previously thought, which could significantly affect the conditions of planetary atmospheres on these planets.

Our next steps are to characterize the known Peter Pan disks, and find more. We won time with the Chandra X-Ray Observatory to find X-ray fluxes for the known systems, which will give us information on the photoevaporation rates of these systems–it will tell us how quickly the stars’ energy evaporates disk material. We will also be doing some follow-up with the Magellan telescopes in Chile this June.

And we’ll be relaunching Disk Detective this year! We’ll be slightly changing the qualifications for including objects, with the goals of finding more Peter Pan disks. We’ll also be using the Zooniverse Project Builder interface, which will make tweaking the project over time easier. Look for a relaunch announcement in a few months!